The “passenger” here is Rodolphe Burger. Surveying the alternative route and passes through trails. On the way to the shifting soundscapes contours.
The film is And I ride and I ride. Not a portrait, rather “the outline of a territory” geographical, human and musical co-signed Franck Vialle and Emmanuel Abela.
The collection is Éloge du transport. Not a biography, but a textual polyphony. round trips between childhood and present, history of rock and intimate story, original and recovery, music and text, sound and image, of a land attachment to another, from one shore to the other .. .
Coproducer
Atopic Productions
Released
06/06/2016
Collection
Filigranes/DVD
Format
140 x 190
Français
Relié couverture cartonnée
10 photos colors + DVD
120 pages
ISBN : 978-2-35046-265-3
Buy
Press review 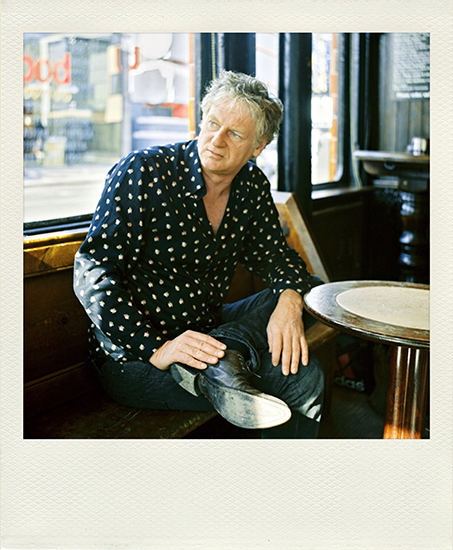 After becoming a professor of philosophy in the early 80s, he picks up the thread of electric music within the collective Last Tape, matrix Kat Onoma cult group which Rudolph is the prime contractor on vocals and guitar radioactive . From 1986 to its separation eighteen years later, this flagship of French rock cultivates seven albums a haunting music, subtly infused with tense blues, jazz chiaroscuro, urban folk and skittish post-punk. Between bone and muscle, dusk. A racy music, definitely.

Born in 1980, Anthony Boile graduated in art history and works in the Paris monument for the Ministry of Culture. Passionate rock music and its avatars, he devoted several online writings Rodolphe Burger and Kat Onoma, supplemented by extensive interviews. “No-musician” is it possible to play, he is a founding member and songwriter of Fractal Female group.

Isabelle Freyburger Born in 1973, studied philosophy, communication and works in various journals whose editors LimeLight, Polysytyrène and Novo. It supports cultural organizations, associations, communities and professionals for the design and materials writing editing.

Born in 1971, Bastien Gallet teaches philosophy and theory of art at the University of the Arts of the Rhine. It was producer at France Culture editor of the magazine Musica Falsa and director of Archipel festival.
He was a resident at the Académie de France in Rome (Villa Medici) and member of DICRéAM. It was at the École nationale supérieure des Beaux-Arts de Lyon in charge of the research project The ideas form. He leads the MF editions today. His work is philosophical and romantic. He is the author of novels, librettos and several essays on music and the visual arts.

Born in 1956 in Paris, Olivier Cadiot is considered a leading figure of contemporary French literature. In 1988 he published the first editions P.O.L book, L’Art poétic’. including follow Le Colonel des zouaves, Retour définitif et durable de l’être aimé, Fairy Queen, A Nest for what, a Mage in summer … It takes part in a new translation of the Bible, published in 2001. He was repeatedly adapted to the theater, for which he also wrote. He regularly collaborates with musicians like Georges Aperghis, pianist Benoît Delbecq, and of course Rodolphe Burger. With the latter, he co Albums On n’est pas des indiens c’est dommage, Hôtel Robinson et Psychopharmaka.

Born in 1967, Emmanuel Abela has studied history of art. Passionate about music, film and visual arts, he participated in the adventure of Limelight magazine in the 90s Since 2008 he is the editor of magazines and Novo et Zut! in Strasbourg. As an author, he led the book tribute to Daniel Darc, Le Saut de l’ange, published in 2013 in Médiapop and Chicmédias.

Born in 1974 in Marseille, Sylvain Maestraggi lives and works in Paris. He realized Histoires nées de la solitude (2009), film based on texts by Walter Benjamin on the town, and writes regularly on documentary film. In 2013, he founded the Editions L’Astree rough on the occasion of the publication of his first book of photographs, Marseille, fragments d’une ville, followed in 2014 by Waldersbach, according to Lenz Georg Büchner.