Kourtney Roy, whose self-portraits plunge us into an imaginary universe where remnants of the past merge with the contemporary performance of the artist. In each of her photographs, we find her, most often alone, or rather inscribed in a unique sensation which has little to do with the feeling of isolation, for it presupposes the presence of a memory. Each photographrepresents a temporal meeting that reveals an ephemeral instant marked by the precise encounter of action with place. Kourtney Roy makes a mark of her presence in the world in the interval of an illusion. Like a silver screen heroine, her body becomes one with the décor, whether by crawling on the ground or jumping behind an innocuous shrub. The settings and the spaces are sources of inspiration underlining a poetics of the banal and the quotidian. Forgotten and empty places often exude a sense of calm or of strangeness, a space-time which permits the artist to express herself and to lose herself in the literal or figurative sense much like the heroes of Terence Malick’s film Badlands. An exquisite image is produced, which at first seems a safe harbour, a place of grace or of liberty, but which progressively shimmers and falters under the punishing rays of the sun to reveal an inescapable truth: the deserted wilds are harsh and empty of hope for those in search of solitude.

In this book he was shot 34 numbered head, accompanied by an original print *, numbered and signed by Kourtney Roy.
The set is presented in a plexiglass case. 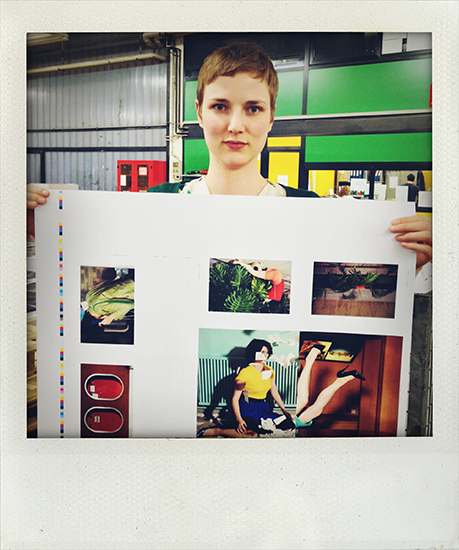 site web
Born in 1981 in Canada, where she grew up, Kourtney Roy conducts studies of Fine Arts then turned to photography that arouses interest in its immediacy and its strong links with reality. Kourtney Roy begins to take self-portraits at the university. At the border of art and fashion, his work shows the cross-influences between these two worlds. It combines in her work fiction and self-fiction, and explores the strange and sublime aspects of daily life in stagings tinged mystery. Kourtney Roy was the recipient of several awards: Picto Prize in 2007, “Screenings Award” in Berlin in 2008, “Emiliy Award” in Vancouver in 2012.