“Madame Yvonne”, a traveling photographer, has crisscrossed the rural Trégor on her bike for over fifty years. From 1902 to 1952, she went to photograph on demand children, families, weddings, threshing, parties, communions, soldiers, the dead, the young and old. Born in 1878, Yvonne Kerdudo went up to Paris from the age of 15 to work. Through various encounters she came to photography and was trained by the Lumière brothers in the early years of the century. Returning to her birthplace around 1908, she settled on her own and worked until 1952, two years before his death in 1954. Emblematic figure of the canton, “Madame Yvonne” is known to all the old and her pictures are still exposed in the family dining rooms around Plouaret. In 2005, one of her grand-nieces, in possession of her archives, contacted us. The Compagnie Papier Théâtre acquired the photographic collection, consisting of 13,400 gelatin silver bromide glass plates stored over 50 years in the photographer’s attic. At least half of these plates include two views, so the fund represents more than 22,000 images. The plates have not undergone major alterations and constitute a real heritage and cultural treasure.It is noteworthy that no written trace accompanies this background. A group of volunteers was formed to do some cleaning, scanning, dating and identification work with the elders who knew the photographer and families with prints. To date, about 8,000 photographs have been identified. This immense work represents more than 4,000 hours a year of volunteer investment over the last 14 years. It brings a little more light every day on this exceptional collection and on the work of Yvonne Kerdudo, courageous and discreet artist of the campaign. 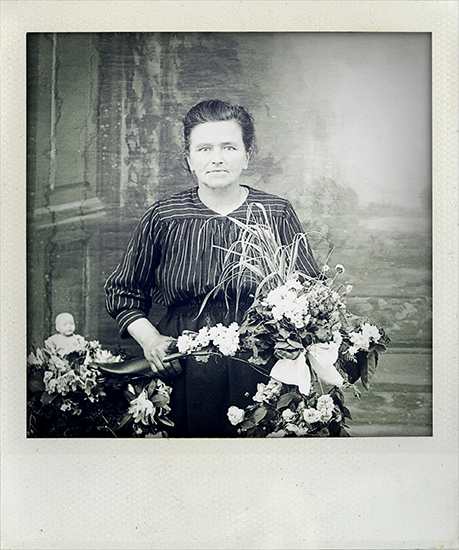 Born in 1878 in Ploumilliau (Côtes d’Armor), Yvonne Kerdudo, better known under the name of “Madame Yvonne” in rural Trégor, went to Paris at the age of sixteen like many young Britons, to find work. She resides next to her brother in Ivry-sur-Seine, she works at the Bicêtre hospital and passes her degrees as a nursing assistant and then a nurse. She met a person from the Guilleminot family, the leading manufacturers of photographic glass plates in France at that time. While working, she began photography, and frequented the studios of the Lumière Brothers.By the years 1905, she was 27 years old, she returned to Brittany and settled at first with her mother at Costy au Vieux -Market. Thereafter she will buy a house in Plouaret. She works as a nurse while developing in parallel her activity as a photographer. She sets up a studio in her house. On request, she travels by bike to photograph people, families, weddings, hordes, soldiers and their relatives during the two wars, the collective work, and all public events missing the life of the boroughs.She travels thus the roads and paths around Plouaret within a radius of forty kilometers. The photos of Madame Yvonne will immortalize the important moments of the lives of families and people and it is in many homes of the territory that have been preserved its prints sometimes framed and signed.

Pascale Laronze Graduate of the National Puppet School Allami Bàbszinhàz of Budapest founds in Strasbourg L’ARALE (Association for Research and Animation around the Children’s Book). Trained in engraving and lithography with recognized artists and passionate about civilization, the Chinese language and all “forms of writing”, she decided to adapt youth albums to the theater and to address young audiences.1988 Company Paper-Theater, it organizes in Strasbourg the first Printemps des livres.1996 The company decides to set up in the Trégor, in Brittany and to mount a project of territory focused on the cultural development in rural environment, by relying on his experience of collaborative and intergenerational work and orienting his creations around writing and the visual arts.1999 The Paper-Theater Company becomes a publishing house by proposing as an editorial line a work of valorisation of collective writings. book We were not deprived of dessert … There was no dessert. is then published and brings together all the interviews conducted for more than two years and transcribed by the parents of the children.2005 As part of the project Mémoires gravées the Compagnie Papier-Théâtre learns the existence of the photographic collection of Yvonne Kerdudo, constituted More than 20,000 images taken in Trégor during the first half of the 20th century. The company acquires the fund and a new project is born: Le Vélo photo by Madame Yvonne. A team of highly motivated volunteers quickly sets up to restore, clean, scan, catalog and archive the entire fund. The entire fund is thus saved in three years with professional methods and equipment. The team of volunteers continues today the work of identification of the photographic collection of Yvonne Kerdudo. 2016 The Hardware Store becomes The Pole Rural Image , the first Image Pole in rural areas. Its creation makes it possible to articulate all the projects supported by the Compagnie Papier-Théâtre and to direct its work of mediation and cultural creation around the image.