In Turkey, the cardinal points are indicated by colors: Ak, white for the South Kara, black for the north. Thus, the Mediterranean Sea, White Sea, turns into Black Sea at the Bosphorus Strait. And it is precisely here that Philippe Guionie chosen as a starting point for Swimming in the Black Sea. Conducted between 2004 and 2012, the series was inspired by Kéraban-le-Stubborn, a Jules Verne novel recounting the tribulations of a wealthy Turkish merchant, Kéraban refuses to pay a tax imposed by the sultan unexpectedly to cross the Bosphorus and Constantinople decided to join by going around the Black Sea.This romantic story is an underlying theme in this contemporary take on the Black Sea. Photographer gradually detaches to form a subjective visual poem with bright colors. From the nearby Mediterranean, pierce the sweet life and the southern accents, but this “wandering around a sea that is hardly seen” is so subtle that it is equally at history with a capital H the more contemporary events.
The photographs in Georgia were conducted in 2012 as part of a photographic residence established by the Tbilisi Photo Festival.
Published in collaboration with the Polka Gallery (Paris)
Released
03/11/2014
Collection
Hors Collection
Format
170 x 240
Anglais/Français
Relié couverture cartonnée
51 photos colors
64 pages
ISBN : 978-2-35046-328-5
Press review 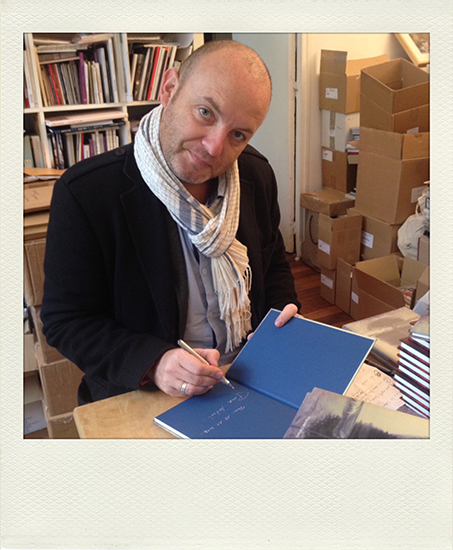 A historian by training, Philippe Guionie claims a documentary photography around the themes of memory and identity constructions. His photographic premise: put faces on human memories that do not.
Author of several books – “Former African fighters,” “A Little Piece of Heaven” (The Imaginayres / diaphanous, 2006), “Africa America” ​​(diaphanous, 2006) & “Swimming in the black sea” (Watermark Publishing, 2014) – personal topics are presented in galleries and festivals in France and abroad. Winner of several photographic awards including the Roger Price Pic 2008 for the series “the rifleman and the three rivers”, he is responsible semiotics courses of the image of photography and multimedia training school (ETAP) to Toulouse and manages numerous workshops in France (Rencontres d’Arles) and abroad. Myop member of the agency since 2009, Philippe Guionie is represented by the Polka gallery in Paris. In 2015, he curated the exhibition “Koudjina in legacies” to Encounters African Photography in Bamako and director of residence 1 + 2 in Toulouse linked to two other European cities (1plus2.fr).