Bataille à perte de vue, Philippe Sollers, l’isolé absolu et Artaud cité, atrocités, atrocities, three documents produced for the collection A Century of Writers. AS Labarthe book by its approach to these authors and highlights with a look of filmmaker reading of their works.
“Georges Bataille, Philippe Sollers, Antonin Artaud. Three writers encamped in the twentieth century, embodying each lucidity in their own way and subversion. Three works prophetic content, visited in their real presence. Three bodies “to work “ recognized by a filmmaker who has been the subject of three papers produced for the series “A Century of Writers, “ directed by Bernard Rapp and Florence Mauro on France 3 – Battle of sight (1997), Philippe Sollers, absolute isolation (1998), Artaud quoted atrocities (2001). This book gives an account of how Andrew S. Labarthe has addressed these writers “of our time, “ reveals his own reading of the works and linkages risky for compilation. In “gaze control“ high close, the photographer Patrick Messina, who accompanied the director on the place of preparation, meetings and film shoots. Among these places, the home of mass campaigns, and the apartment on Rue Ramey, Paris, two detours labarthien laboratory. “
Valerie Cadet 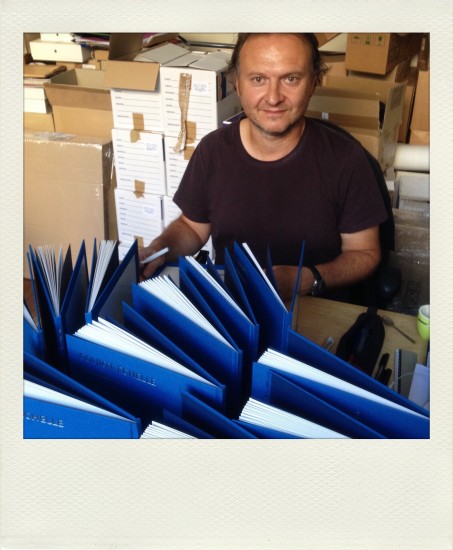 site web
Born in 1967 in Paris, lives and works in Paris. After the Ecole Louis Lumière, He made his first photographs for Liberation Télérama and Les Inrockuptibles. He imposed in various areas of the picture to its own semantics. All references that accompany our daily overhyped as are scrutinized, magnified and challenged at the same time. His recent personal work in the field of urban landscape, like New York, Hong Kong, Paris, or rural areas like Iceland, Coteaux du Languedoc or the Gulf of Morbihan required.