Vichy is a stage of display and a shadow theatre. Swedish photographer Anton Renborg has strolled by stately villas swaggering beneath an over-excess of ornament, and wandered up to mysterious, untidy houses that seem coiled up to hide the secrets lurking within. He has walked by faces bearing the marks of time, ghosts from the Belle Epoque, and has snapped bodies barely out of childhood yet already compelled to play adult games. He has opened doors that closed right back on him, gone up broad avenues and no-entry streets, and sipped at the well of the gaze of young girls in flower and the Fontaine des Célestins, whose mineral water lightens up the complexion of old men. He creates images of a city based at one and the same time on appearance and the concealed. Just a few images, a rare, multifaceted bouquet of photographs with bright notes and white pages, the missing shots of a city that can also be read in its recesses. Renborg builds stories out of images like musical scores, playing with the assonance of colours, the tempos of landscapes, the rhythms of architecture, to produce clean, unaffected photographs that act no less as catalysts of fiction. […] Natacha Wolinski

Special edition printed in 20 copies. The book is accompanied by an original photograph signed and numbered by Anton Renborg (print size 18 x 24 cm). 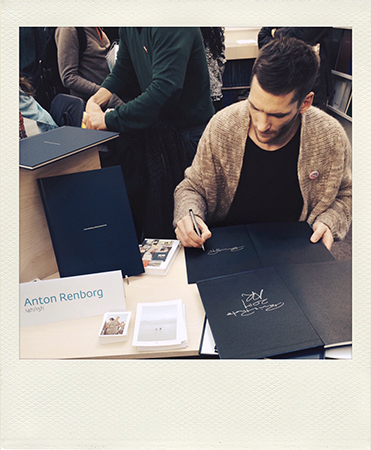 Anton Renborg is a young Swedish photographer living in France for a year. Next and return to the island every summer for five years, the photographer has his camera back into the ying and yang of Corsica which can not be reduced to the parties Fisheries tourists neon shorts, nor the splendor of landscapes if they reduce the human to microscopic size. Playing both the retail and pan effect look, as if the eye was constant challenge to find the right equation, Anton Renborg measured how well it was not necessary to accuse the contrasts that they appear. His images testify, casually, of civilization shock.